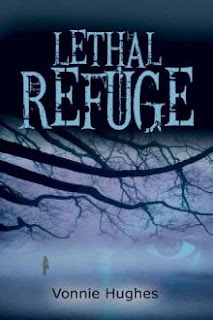 Romantic suspense is my favorite genre to both write and read. Nowadays there’s an overlap between ‘suspense’ and ‘romantic suspense’ as most suspense novels contain a certain amount of romance. Once, well-known male writers seemed to have decided at the last second, “Oh, don’t forget my female readers.” And they hastily shoved in a little liaison. Or perhaps their publisher gave them a nudge. But often those interludes seemed forced. However over the past few years they’ve become much more adept at the romantic aspect e.g. Harlen Coben and James Patterson.
And hey, haven’t female authors got gutsy and down and dirty lately when writing suspense? Huh? I just love Karen Rose, Tami Hoag and Anne Stuart. Their background knowledge shines for me because it’s not overly technical as if it’s saying: “Hey, I did my homework!” But the romance is peripheral to a darned good story each time.

I’ve had two romantic suspenses published over the past couple of years and there’s another in the works. I’ve much enjoyed writing them, even though I’m known more for my Regencies. Anyway, here’s something about LETHAL REFUGE, set in New Zealand:

LETHAL REFUGE
I was born in New Zealand and spent most of my life there, although our family now lives in Australia. The two main differences between Australia and New Zealand are the weather (warmer over most of Australia if you discount Tasmania which is very blue/green like New Zealand because it’s wet and often cold), and the fact that NZ has 4 million people and B-I-G Australia has 21 million residents. Yup. Australia is vast. It is the sixth largest country in the world and has a whole continent to itself. It’s not the sort of place where you get in your car and zip over to Auntie Flo’s. If you hear an Australian say, "It’s just down the road," you know they lie. Sure, it’s just down the road, but the road is a 2,000 kilometer dust-encrusted two-lane bitumen highway straddling two states, millions of curious kangaroos, hundreds of racing emus trying to beat your car, some wild camels, a million gumtrees, several townships and a couple of rivers if you’re lucky. Nor is it the place to get lost in the bush, since much of the bushland looks the same. You can go around in circles forever.

When they say, "It’s just down the road" in New Zealand, they mean it’s down a one-lane bitumen highway that goes for ten kilometers then switches to a gravel road that finishes at Jessop’s farm with 1,000 sheep dotting the peaceful hillsides. And at the back of that farm is bushland, tight, green and impenetrable. In the winter it drips with damp and in the summer the cacophony of cicadas screams in your ears.

But I digress. They say ‘write what you know’ and because I know more about the NZ Police than I do the Australian system, I based LETHAL REFUGE on the NZ system. But I took liberties with the truth. Of course I did. It’s fiction, for heaven’s sake. But think of the British Police and you’ve got a handle on the NZ Police Service which was originally based on the British system.

In LETHAL REFUGE, Célie Francis, a prickly young woman, self-reliant to the point of being irritating, witnesses the aftermath of a murder and is stalked by the murderer. When she is placed in the witness protection program, she can no longer be self-sufficient. She is at the mercy of a bunch of people who want to help her, for God’s sake. And then there’s Brand Turner, the police psychologist with a vulnerable intellect as high as the sky who has an annoying habit of demanding trust from the relocatees. When the murderer seems to track their every move, Célie finally realizes she can’t do stuff on her own any more.

Here’s a link to my Amazon page where you can find it in both paperback and as an e-book:

http://www.amazon.com/s/ref=nb_sb_noss?url=search-alias%3Dstripbooks&field-keywords=Vonnie+Hughes&x=18&y=20
Who can you trust if you can’t trust your own mother? Through the clammy fog, Celie Francis hears the chilling message. "I know who you are, Celie. I know where you live." And in the terrifying aftermath she reconnects with her dysfunctional family in ways she had never imagined.

I have attached two pictures to show just how impenetrable the New Zealand bushland can be. The house is Brand’s next door neighbor’s place. Steve and his wife don’t miss much and Brand’s low profile gets shot to hell by Célie’s behavior. The other picture shows the type of area that Célie stumbled around in, right on nightfall. Creepy, huh? 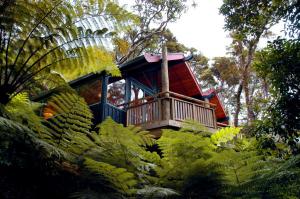 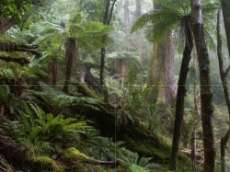 If you have any more questions or would just like to say hi, email me on
In the meantime, have a great day!

By DawnsReadingNook at February 18, 2017