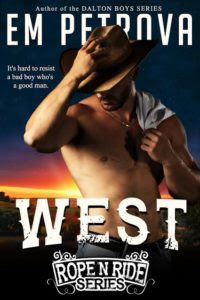 It's hard to resist a bad boy who’s a good man. But that’s exactly what Malou Bullers, M.D. is trying to do. While working as the rodeo doc, she turns a blind eye to the bulging biceps and Wrangler butts that pass by. Except for one cowboy—and he’s worst of all. West Calhoun is a womanizer, plain and simple. The tie-down roper and reality TV star is never seen twice with the same woman. When he’s not busy on his family’s growing ranch or trying to keep the TV cameras on his good side, West has his eyes on that big win. But he’s distracted by the eccentric new-age rodeo doctor. After a one-night stand with Malou, he’s hooked, but convincing her that he isn’t with a dozen other women might be more challenging than taking on a herd of angry bulls. Meanwhile, a new TV producer is luring West with the promise of a spinoff show and big money that will help his family. But with Malou avoiding him, he’s got troubles that won’t be helped once her secret is revealed, sending West into a tailspin. Can she walk away from the best man she’s ever known? 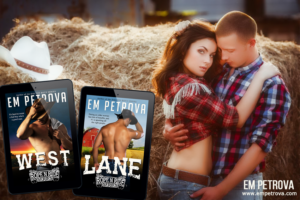 EXCERPTS: Her voice was too raspy. That he could affect her this way went against everything she knew about herself. She was a strong, independent woman, not a twittering Buckle Bunny looking for a meal ticket. He did a push up on the wall around her, pressing a kiss between her brows. “Later.” Then he walked away, leaving her hot and sweaty and too turned on to form a complete thought. The only thing she knew for certain was she couldn’t walk away from West until she finished whatever was between them. If she didn’t, she’d never shake him. 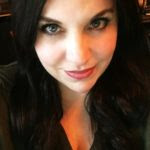 Em Petrova was raised by hippies in the wilds of Pennsylvania but told her parents at the age of four she wanted to be a gypsy when she grew up. She has a soft spot for babies, puppies and 90s Grunge music and believes in Bigfoot and aliens. She started writing at the age of twelve and prides herself on making her characters larger than life and her sex scenes hotter than hot. She burst into the world of publishing in 2010 after having five beautiful bambinos and figuring they could get their own snacks while she pounds away at the keys morning, noon and night. In her not-so-spare time, she is fur-mommy to a Labradoodle named Daisy Hasselhoff and is a world-class editor who has worked with USA Today and New York Times bestselling authors.

Visit Us Here!
By DawnsReadingNook at February 12, 2017