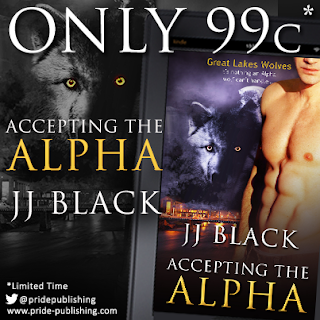 In celebration of our wonderful author JJ Black's popular M/M  Romance books, we are discounting the first in the Great Lakes Wolves series,Accepting the Alpha! This book will be discounted to 99c/p from the 5th December for a limited time on Pride Publishing, Amazon, Kobo and other eBook retailers. We will also be discounting book two in the series,Our Omega, on our site and Amazon.

Accepting the Alpha Blurb:Can an Alpha wolf convince his straight mate to give love a chance, before  an unexpected enemy tries to rob them of all they hold dear…even their own lives?Eli Steele is a wolf without a pack. An invitation from his best friend, brings him to Grand Rapids, and a meeting with the local Alpha changes Eli’s life in ways he ever expected.Kellan Reeves, Alpha of the Grand Rapids Pack, had lost hope of ever finding his mate until Eli came to him, looking for a pack. Realising Eli is his mate, he feels things couldn’t be more perfect…discounting the angry pack Eli left behind. There’s also the insignificant fact that Eli’s not gay. It’s nothing an Alpha wolf can’t handle.    While Eli struggles to understand his feelings for Kellan, an unexpected call for help has everyone on edge. As enemies move in and a horrifying plot is revealed, Kellan and Eli fight back, not only for themselves, but for the fate of all shifters.

By DawnsReadingNook at December 06, 2016