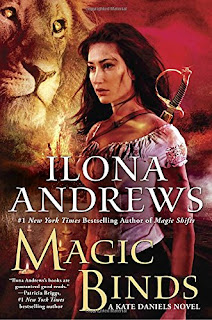 The end is near for the series and in the latest installment of the Kate Daniels series, the stakes are even higher than before.

My Rating for Magic Binds: Five Stars and a Recommended Read

For Kate Daniels, this should have been a time of joy, of planning her long overdue wedding to the former beast lord, Curran but instead she has to deal with some major issues. Like her father, Roland, kidnapping the demigod Saiman and slowly draining him dry, like several oracles telling Kate that if she marries the love of her life, will burn. But when Kate is left with no options, she finds the one thing, the one person she can ask for help…the one she killed. The odds are long but for Kate Daniels, that is when the rules are meant to be broken. War is coming…will Kate be able to survive or will fall to her father?

MAGIC BINDS is the next to last book in this wonderful series that just keeps getting better and better with each book by the author Ilona Andrews. With this story we finally see Kate determined to end her father’s grab for power even as she struggles with the power she herself wields. I got to give this author props for creating a cast of characters that just leap off the pages. From the first book, Magic Bites, when we met Kate and the rest of the wonderful cast of characters, we see a growth for everyone with each book, especially no more than Kate as she finds out just who, exactly, she is, what she is capable of and what she will do to protect what she feels is hers. This is an author who lets the main characters, Kate and Curran, as well as many of the secondary characters grow with each book even as their backs are against the wall and the odds are against them. What holds my imagination was the battle Kate does with herself as she fights to set up rules as she tries to reign in her power after she claimed the city and . That internal struggle is what is half of MAGIC BINDS story and delivers the most bang, in my opinion, within the story. That struggle as Kate tries to not turn into her father Roland and her desire to not go down that path is what makes that emotional aspect of the story so powerful. Her struggle inside and out is the core of the story in MAGIC BINDS and the authors do a wonderful job in capturing that struggle so well within the pages of this latest addition to the series.

As we race to the climatic end of the series, we find Kate, Curran and all their allies and friends racing alongside them as they face down Roland, his army and his powerful magic. With each page the reader is drawn into the story of MAGIC BINDS, as twists and turns abound when you least expect it and you find out that a few secondary characters are really something so much more than they appear, the twists will leave you breathless even as you flip the pages to see what happens next. With each page, the author does a marvelous job in capturing soft moments then the really hard ones next. We get to see Kate and Curran along with Julie and the rest of their family try to plan a wedding amid the threat of war; of trying to figure out how to survive to live another day and watch as the happiness they are fighting for lives to see the light of a new day. Ilona Andrews delivers a powerful story about change, about family, of hope, love, fear and more within the pages of MAGIC BINDS and wraps it all up with a major red ribbon for their readers to pull open. MAGIC BINDS is more than a story about a mercenary who fell in love, wants to live happily ever after and all that. It’s about doing what is right even if you know that the path is one that changes with every choice you make. It about trusting your partner, your love, the one who knows you better than anyone else and shows you that love is the best reason to move forward even if they get mad at you and want to scream at you. Love is what binds this story so well with the series because at its core, it’s Kate’s love for Curran, for Julie, for and all its residents that cause her to make the choices she does within the pages of this latest book.

I applaud the author for creating such a wonderful series, with a diverse set of characters that you cannot help but fall in love with, cry over and mourn even as you smile in happiness as some get their own fairy tale endings. As we lead up to the final battle, I look forward to seeing where the author goes in that final book and will cheer Kate, Curran and the rest on as the war that has been lead up to in past books finally, agonizingly, comes to the pages and the readers will be waiting, with a bated breath to see what happens next as will I.

By DawnsReadingNook at December 05, 2016