A Triptych of Suspense & Romance

Thanks for having me at the Reader’s Nook, Dawn. I’d like to talk about my romantic suspense, Tryptych, today. 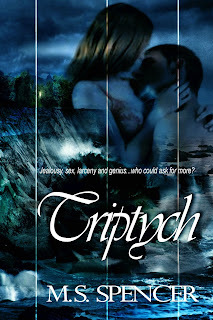 Take lost masterpieces, brilliant inventors, and stolen prototypes. Add the Three Sisters, Indian spirits who guard the Potomac River. Stir in three sisters and their lovers. Result? Jealousy, sex, genius, larceny and love. Who will end up with whom, and will the Three Sisters take another life as the legend demands? 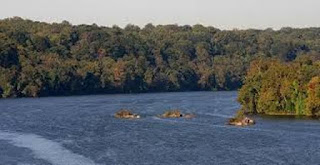 Miranda, Honor, and Sybil Cabot live in a Queen-Anne style mansion overlooking the Potomac River. The mighty Potomac, the fourth largest river on the east coast, runs 383 miles from Fairfax Stone, WV to Point Lookout, MD where it flows into the Chesapeake Bay, the “Mother of Waters.”

When she has time, Miranda, the heroine, likes to take the gravel path down the hill to the river. The stone on which she sits and dreams of past love and future love, looms large in this story, but in this excerpt, it is the path itself that serves as a love nest.

Excerpt (R): Sex on the Stones

They sat down on the narrow gravel path, hip to hip. His arm snaked around her shoulder. She let him. Together they gazed out over the water toward the cliffs that rose opposite them on the District side. Several modest bungalows perched on top. She had once explored the tiny cul-de-sac there, where half a dozen families had lived for generations. The cheerful little village of parents and grandparents and toddlers and dogs and cats stood in marked contrast to this side of the river where only two houses—Dieter’s and the Cabots’—sat on almost ten acres of woods. She woke from her daydream to feel Luc nibbling her neck.
She turned her head and found his lips in the way. The kiss started softly, then hardened and turned hungry. Luc whispered, “Miranda, I want you. Now.” His hands wandered over her shoulders and down to her breasts, breasts that still heaved from her run and her fright. He cupped one, leaned down, unbuttoned her blouse with his teeth and kissed the soft bulge just above the bra. She rose to meet him, pressing the nipple between his lips. He held on, suckling, as he gently laid her down. She ignored the sharp prick of a stone, took her other breast out of its nest and held it for him. He shot a quick look at her from under the black brows and took her offering in his mouth.
She lay, reveling in the tingling, pulling sensation. trailed down from her nipples to her belly and her vulva. She could feel it begin to pulse, opening and closing in anticipation. Luc lay full on top of her, grinding her suffering buttocks into the gravel. She didn’t mind. His hand took hold of the hem of her skirt and lifted it to her waist. His head darted out of sight and she felt his lips pull her lace panties down. Dreamily she thanked her personal cupid for making her choose the sheer black lace bikini tied with a sensual red ribbon today. Luc mumbled something. “What did you say?”
“Do you always wear such sexy underthings? I won’t be able to think of anything but this bit of black lace whenever I see you.”
She giggled. Miranda! You’re too old to giggle. And you should stop him now before…unnnngh. Too late. She bucked against his tongue, and spread her legs wide and wantonly so he could reach the sweet spot. “Faster, harder, oh Luc!” The climax came swift and hot. She held her body off the ground, milking his tongue. “More, more,” came through gritted teeth. The sucking stopped. “Luc! Don’t stop, don’t stop, please.” She was begging but didn’t care. So close.
“No, dear Miranda. We come together.” His face appeared before her. His lips were wet and she could smell her juices on him. It sent her into paroxysms of desire. He deliberately held her shoulders down. She writhed in heat, then froze. His penis had rammed into her. She was so wet it slid all the way to the hilt. Slowly he pulled out. The walls of her vagina felt his hard rod scrape the sides, driving her to fresh heights of ecstasy. He entered her again, and slowly pulled out. Again and again. They fell into a rhythm, she rising to meet his shaft and falling away, only to wait in delirious anticipation of the next penetration. She felt her orgasm grow and opened her eyes.
“Luc, I’m coming.”
“At last, dearest.” His rhythm increased to fever pitch, in and out, urging, demanding that she meet him. Just as she arrived at the point of release, he checked in midair and let out a great sigh. A flood of warm liquid poured into her.
They lay side by side, staring up at the clouds. Miranda refused to feel guilty. It just happened. Let it go. She peeked at Luc’s face, the high cheekbones stretching the olive skin, his thick lashes nearly touching the thick brows. One black lock fell artlessly over his forehead. She felt a rush of something and hoped it wasn’t love. I don’t want to fall in love with someone I’ll soon be visiting in the slammer. There’s a name for women like that. “Luc? We mustn’t do this again.”

About the Author
Although she has lived or traveled in every continent except Antarctica and Australia (bucket list), M. S. Spencer has spent the last thirty years mostly in Washington, D.C. as a librarian, Congressional staff assistant, speechwriter, editor, birdwatcher, kayaker, policy wonk, non-profit director and parent. She has two fabulous grown children, one fabulous grandchild, and currently divides her time between the Gulf coast of Florida and a tiny village in Maine.

By DawnsReadingNook at November 18, 2016

Thanks for having Miranda and Luc today at the Nook. I hope your readers enjoy the spicy excerpt. M. S.