Come join us in our interview with Trinity, the heroine from SEDUCING THE DARKNESS by Shiela Stewart.


Looks around at the misty darkness and settles down on… on… well, something solid. “Hey, Zi, where are we?”

Sitting on his own perch of nothingness, his reading glasses slide down to the end of his nose and he flips out a hand to introduce the lovely Trinity Ford. “Interviewing Trinity, remember?”


“Ah, yes, the heroine of SEDUCING THE DARKNESS by Shiela Stewart.” Angelica wraps her scarf a little more snugly around her neck. “And a quite beautiful vampire.  Tell us Trinity do you prefer your blood out of a crystal goblet or a fresh vein?”


T: I’m not a crystal type of girl. Every vampire would rather have their blood warm from a human, but I get my blood from Basil and when I can’t get from him I’ll drink it from whatever is handy.


Zi shakes his head. “Now, for a less personal question, just why do you prowl the streets to kill other vampires?


T: They’re vermin. It pisses me off that they choose to kill a human, which they were once, then find an alterative to getting blood. There are plenty of blood banks. They could feed off of other vampires. The blood isn’t as pure, but its enough to sustain them. I’ve never killed a human being for blood and I never intend to. 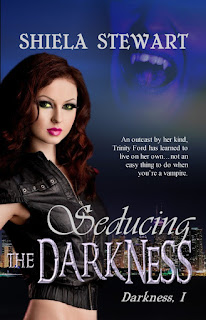 “That’s not personal?” sniffs Angelica.  “Seriously, Trinity, do you plan the attacks or are you just an opportunity sort of gal? Also, do you leave time for ice cream, or are vamps allergic to ice cream?”

T: I don’t plan. I go out at night and wander the streets. I know the feeding grounds so that’s mostly where I hang out. Humans are clueless. They have no idea we exist. Still, if you’re leaving a club drunk off your ass and decide to walk through a dark alley, you gotta know its not safe, in any way. So because they’re too stupid to be safe, I protect them. Clubs are the prime feeding grounds for Vampires.  As for ice cream. Hell yeah. Just because I drink blood doesn’t mean I can’t enjoy regular things. I also love pasta.

Zi decides they should go to Dairy King right after the interview but says nothing.  “Tell us about Basil Hawthorne? Is he the love of your life… errr… death… errr just what is your status, living or dead or inbetween?”


T: I’m more or less alive. My body functions like a normal human minus some attributes. I don’t understand the whole thing myself so I try not to really think about it. I have a heart beat, however slight. I breathe, I bleed and I poop and pee. I just live forever, don’t get sick, can’t stay in the sunlight unless I want boils all over my body.  As for Basil. The guys a no good cheating bastard. But I love him and yes, he is my soul mate.


Angelica leans forward and whispers, “Is it true, once you had vamp you never go back?”


T: To be honest, I’ve never had sex with a human being. Basil was my first so I have nothing to compare to.


Rolling his eyes, Zi asks, “Tell us about those missing human girls?”


T: Unfortunately, kids go missing every day. If I could prevent that I would. There is something different about these missing girls. It doesn’t feel like a usual abduction. I’m trying to figure out if there is a common denominator so I can hunt down the bastard who took them and rip their throats out.


“Finally, Trinity, if you weren’t such a computer geek, just what would you do with your days?”


T: I wanted to keep part of my humanity so I decided to get a job. I can’t exactly work in food or retail unless it’s a night job. I’m not much of a people person. I saw an add for a computer repair person needed and I was pretty good with computers before I met Basil so I thought what the hell. Jonah, the guy who owned the place decided to give me a chance—I did some begging and lying—and made me his secretary. Occasionally I would watch him repair a computer, or debug the system and it peeked my interest. He showed me how to clean out a computer and get rid of viruses and occasionally I would have to work on someone’s website if they were having trouble, and that was it. I was hooked.


Thank you so much for spending time for us. It has been a dark delicious delight.


Thank you for having me.