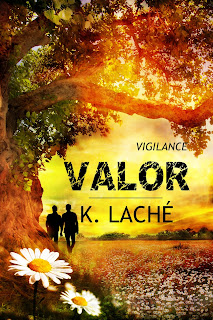 Please give a warm welcome to Blare Chaplynn from Valor by K. Laché today as we sit down and see what makes him tick.

What’s your favorite thing to do when you’re not saving your lover?
I wouldn't say Rivet needs saving, really. He is much better equipped for saving then I am. Ha, I tend to freak out. Oh, wait, I guess, I save him emotionally, I assume that counts? Anyway, back the question: eating, definitely.

What is it about your love interest, Rivet Scalzo, that makes you crazy in a good way?
Where to start? He's a gorgeous and probably one of the most thankless men I have ever met. It's one of the many, many things I love about him, but it breaks my heart and then he does this cute little half smile, healing my heart again.

Do you sometimes want to strangle your writer? Thrash her/him to within an inch of their life? Make them do the stupid crap they makes you do?
I'm pretty sure it's the opposite. I know she wants to strangle us characters a lot of the time for forcing her hand to write what we think should happen or what feels natural to us. I almost feel bad, but then I know she's happy in the end. Of course, after all of the blood, sweat, and tears have been cleared away.

Favorite food?
I have to pick only one? How about a favorite category? I love junk food: pizza, chili cheese fries, soda. The more calories it has in it, the better I like it!

Tell me a little bit about your world. What are your greatest challenges in that world?
My world is very much like the real world. There are a lot of superficial people and while being gay isn't a huge problem in my town, not looking "normal" is. Granted, there are people who don't like the fact that Rivet and I are gay, but Rivet is scarred and came back to my town, the same town he grew up in, after about ten years. Rumors were started and believed about him, so he had to come back to rehabilitate to all that negativity.

Describe yourself in four words.
Hungry. Compassionate. Talkative. And, uh, did I mention: hungry?

What do you do for a living?
I'm a model, or, well, was a model. I stayed with local or semi-local designers and photographers. I didn't plan on being a model nor staying a model. It was just a pit-stop for me.

What do you fear the most?
Losing Rivet, now that I have him. It's sappy, I know, but when you read about our trials and tribulations together, you'll understand.

It takes valor to support and love those who need it the most and never expected to receive it.

For Rivet Scalzo, returning to his childhood home after a decade was not on his list of places to go while recuperating. After nearly being blown up on a mission, Rivet is forced to deal with his PTSD and sudden deafness without help from Vigilance, the secret governmental agency he works for. He resigned himself to a lonely recovery, but, perhaps by chance, he met Blare Chaplynn, a model whose caring nature helps ease the horror of Rivet’s home life. As they grow closer, Rivet is burdened by the secrets he can’t share with the one man he grows to love.

If Blare knew a mild concussion was all he needed to meet the man of his dreams, he would have gladly accepted it long ago. He knew there was something special about Rivet when he first saw him at the park, but never guessed this man of mystery would be hiding so many secrets. Blare is forced to confront the fact that Rivet may never tell him everything, but is trust the reason Rivet is so close-lipped or is it something more?

Rivet walked over to the armoire and typed his nine-digit code into the keypad with the knuckle of his finger. The light to the scanner flickered on. He placed his hand flat and watched the string of light move up and down his hand. The doors of the armoire clicked and opened. There was a small flat-screen monitor on each door and one monitor settled in the middle. A small metal stool raised from the floor. Rivet sat, dropping his bag by his feet and pulled the keyboard from under the monitor. He held down the escape key while typing a four-character password. All three monitors flickered to life showing a plain command box with Passcode at the top and the cursor blinking below it. His fingers easily typed in a twelve-digit code.

When the computer loaded, a new message window popped up. He clicked the mouse to view it and quickly read the message:

Rivet sighed and clicked on the contact’s name. It brought up a live video feed of a man sitting in a nondescript office, bookshelf behind him.

“Agent Scalzo,” the man’s voice was commanding and firm.

Rivet was used to the no-nonsense voice and gave him a nod. “Commander.”

He paused a moment before answering. “Sir, civilian life and I do not agree.”

“You need to make it work.”

Rivet shook his head. “All due respect, sir, couldn’t I have been stationed elsewhere? I have told you about my family. I could have been anybody, anywhere else.”

“You are on leave and need to be who you really are, not another persona. The Council and I believed this was the best option.”

Rivet snorted bitterly and fought not to glare at his superior.

Commander Donovan narrowed his eyes. “What was that, Agent?”

He clenched his teeth. “Nothing, sir.”

He watched the commander pause a moment. “You are to pick up a package at the post office. The clerk will ask you how you are doing and tell whomever it is that you’re glad to be away from the rain in London. The package contains a secure laptop and cell phone, understood?”