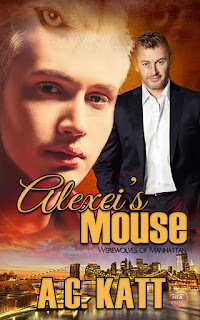 After leaving his place as the Russian Second and immigrating to America, Alexei Davidoff just wants to settle in and not upset the status quo. He wants to start his position with Garou Industries and improve the conditions for his packs. The gods have a different plan for him. Donal Berne ran away from home at fourteen to escape a bad situation and found himself in an even worse one. Seven years later the only way out that he sees is to overdose. On the verge of Donal's suicide, Alexei comes to his aid realizing that he is his give Mate. Overcoming the physical and mental injuries will take time, patience and a blessing from the gods...to use both Alexei's and Donal's experiences to assist homeless and abused wolves.

Check out the entire series:

On his way home from a meeting of the North American werewolf council, Armand La Marche is stopped in his limousine by a boy who is hurt by an unknown assailant who murdered his friend. After decades of searching, Armand has found his mate. There is one problem, someone is trying to kill Sean. Sean Quinn's friend Leroy was gutted trying to protect him. He runs for help and stops the first car he sees. Armand LaMarche is head Alpha of the North American werewolf council and was in his limousine on his way home to his Manhattan brownstone. When the wounded boy stops his car, Armand recognizes two things:the boy is part wolf, an Omega with a great gift, and he's Armand's mate. Now all Armand has to do is claim his mate and keep him safe from the murderer.

Ian Sullivan is being chased by a mobster and has to come up with five thousand dollars he doesn't have. His only hope is an estimate for a large house. Little does he know that the house belongs to a loup garou who just happens to be his mate. Ian Sullivan is in trouble. His father and brother died because his brother gambled and owed money to a mobster. Now Sal Ferrara want to collect from him and if he doesn't, he'll take Ian as his boy toy instead. Ian's only hope is getting a job from an estimate his father had outstanding for an seventy eight hundred square foot house. Little does Ian know that the house belongs to a Remy Clavier, a loup garou who meets Ian and knows he's found his mate. Now all Remy has to do is take care of Sal Ferrara and convince Ian, a human, to accept both him and his wolf.

Colin Callahan, scarred as a child in a fire, delivers Chinese to supplement his income until one day he delivers to the loup garou who is his mate. Alpha Marc Thierry was used to the North Woods of Minnesota so his elevation to third on the loup garou council necessitated a move to a Gramacy section of New York City. On Monday nights his housekeeper is off and Marc doesn't like casseroles. He calls for Chinese and gets a musical voice on the line that calls to him. To his delight and surprise the boy on the phone delivers his food and is his destined mate. Unfortunately for Marc, Colin Callahan thinks that the only reason Marc could want him is biological, he has to like his mate. Colin has a scarred face and thinks no-one could love him as he is. It's up to Marc to convince him differently.

Returning from his territory in Atlanta, Gabriel Martin stumbles across a man in an alleyway who has been gang raped - his mate. Gabriel Martin has hope. Three of the Alphas on the council have found mates in the past few years. Returning to New York from Atlanta, he comes across a human who has been raped in an alleyway. The human is his mate, Kane Brady. Kane has been teaching at the local high school and refuses to rubberstamp the education of their star basketball players' almost paying the price with his life. He's unusual as he's a Human Omega but he can't be intimate with Gabriel because of his horrific experience.