Since the release of the Infected Holiday Special is coming soon, I thought I’d get a bunch of my characters together to talk about the book: Roan McKichan, Dylan Harlow, Fiona Sutton, Holden Krause, “Tank” , Grey Williams, and Scott Murray.

Andrea: To kick things off, I should ask what your favorite holiday is.

Grey: That’s an easy answer though, isn’t it? Everybody likes Halloween.

Holden: Not me. I dislike all holidays. What’s the point of them beyond making all poor people feel bad? 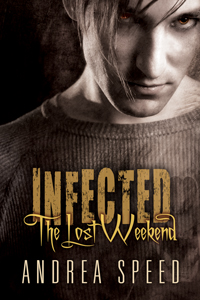 Holden: Was that sarcastic? Sometimes I can’t tell with you.

Tank: No, I’m serious. They may have begun as harmless festivals or ways to mark the turn of seasons, but they’ve definitely been co-opted by capitalist forces. Stapling religious meanings to them doesn’t make them suddenly legitimate.

Scott: Tank is from a long line of political activists and he’s taken many pucks to the head. You’ll have to forgive him.

Tank: Speak for yourself. I’m not the one who’s been sidelined by a concussion.

Scott: Yes, but I’m coasting on my looks. No one expects me to be able to talk good.

Fiona: Oh my God, and men say women talk too much? When these guys get together, I have to lob in a smoke bomb to get a word in edgewise. These guys yap like you wouldn’t believe.

Andrea: Back to the topic at hand –

Andrea: – was there a holiday not covered in the book that you wished was covered?

Holden: No. They’re all terrible.

Andrea: That’s in the book.

Scott: Is Cinco de Mayo an actual holiday, or just an excuse to drink tequila on a Tuesday?

Dylan: It’s more like an American bastardization of Mexican Independence Day, which isn’t on May 5th.

Scott: When is it?

Grey: Okay, is that in the book?

Grey: Why the hell not?

Holden: What the hell kind of excuse is that? You’re the writer, right? Write, goddamn it.

Tank: What about Canadian Thanksgiving? Is that in the book?

Andrea: No, I forgot that one too.

Andrea: Not when I was writing you weren’t.

Roan: Where else did we have to be? Aren’t we a captive audience? 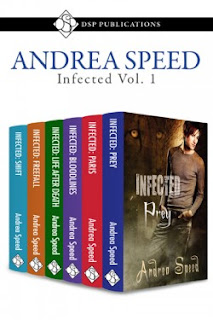 Andrea: Guys, we’re getting off the topic here.

Tank: Not really. We told you the holidays we wanted, and you didn’t include them. We’re disillusioned.

Fiona: Really this is your fault for asking the question in the first place.

Andrea: I guess we covered the holidays you hate question.

Holden: All of them. Next question.

Andrea: But the others haven’t –

Grey: Do we exist to help you?

Fiona: Okay. So why do you expect us to help now?

Holden: And let’s be real here: I’m not known for my helpfulness.

Holden: You say that like it’s a bad thing.

And that seems like a good place to leave it. The Infected Holiday Special is out May 17th (linky here: https://www.dsppublications.com/books/infected-holiday-special-by-andrea-speed-247-b ) and it was fun to write, in spite of these guys. One of these days, I’m not going to be shown up by my ungrateful creations too. (I can always hope, can’t I?) 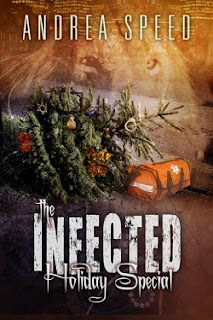 Peek behind the curtain with Roan McKichan and the various characters who make up the Infected universe in this sometimes serious, sometimes humorous collection of short stories centered around the holidays.

There’s Kevin, who reflects on how lonely his life in the closet is. And Fiona and Tank, who go on a surprisingly good first date. Roan himself finds his Halloween celebration at Panic interrupted by loose cats and obnoxious frat boys while Paris contemplates his mortality on their impromptu honeymoon. Dropkick deals with her new marriage and male egos on the job, Roan meets Connor at the scene of a drunken fight, and Holden contemplates his future as a street kid. These stories and many more will be told, centered around more holidays than you can shake a dreidel at.

Andrea Speed was born looking for trouble in some hot month without an R in it. While succeeding in finding Trouble, she has also been found by its twin brother, Clean Up, and is now on the run, wanted for the murder of a mop and a really cute, innocent bucket that was only one day away from retirement. (I was framed, I tell you – framed!)
In her spare time, she arms lemurs in preparation for the upcoming war against the Mole Men.
Viva la revolution!
IN ABSTENTIA BY ANDREA SPEED: http://andreaspeed.com/WRITER OF STUFF (TUMBLR): http://notmanos.tumblr.com/8TRACKS: http://8tracks.com/notmanos
By DawnsReadingNook at April 24, 2016