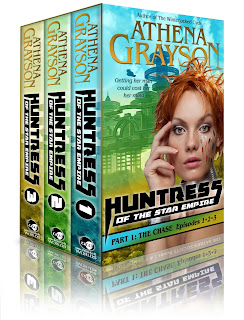 Please give a warm welcome to Micah Ariesis from Huntress of the Star Empire by Athena Grayson today as we sit down and see what makes him tick.

What’s your favorite thing to do when you’re not saving (the world, clients, your mate)?

First, polite protocol would have me thanking my gracious hostess for allowing me voice on your feed. Knowledge and information are precious commodities where I come from. In fact, when I’m not in handcuffs or otherwise fleeing for my life, I roam the many planets of the old Star Empire, hunting down and preserving knowledge lost to the centuries. Before my people were lost, I was an archivist in a great library. My soul aches for its loss.

What is it about your love interest, Treska, that makes you crazy in a good way?

Treska. Ah, Treska. She’s an enigma to me. And for someone of my abilities, that’s saying something. She survived a terrible tragedy practically at Ground Zero, and even though her mind and body were broken, she fought for life. She is fiercely loyal to those who granted her a second chance, but I fear that allegiance will blind her to their faults. And she’s positively unstoppable when it comes to her job. That’s how we met--she hunted me, and blasted me right out of the sky. There is a part of her that believes whole-heartedly in noble causes, and it reminds me of my younger days. She reminds me of my younger days, and my first, youthful love. What drives me the most around the bend is the fact that my abilities can help her--if she could only stop believing that I am a monster.

I wouldn’t mind a few more adventures in civilized places. I admit to enjoying a bit of the creature comforts, and I think Treska has had precious few of them--I would like to introduce her to the more pleasurable aspects of existence...although I hear this mad cackling in the back of my mind now that makes me certain I will regret getting what I wished for...

Favorite food? Definitely NOT protein cubes! Anything but protein cubes. The star system’s loss of Tenrayan wine is an inestimable tragedy, but I admit I have developed a taste for Guerran street food.

The old Star Empire was a loose consortium of over a half-dozen races--none of whom originated in our system, but all of whom know no other home. The Capitol is the innermost habitable planet and a giant city, and the other habitable worlds and moons spread out like gems in the crown of the Jewel, our primary star. There are thirty Orbits in our system, each connected by a Jumpgate that allows us to travel from orbit to orbit in a very short time. The Jumpgates run on schedules, and it’s very very dangerous to enter a Jumpgate out of schedule, because you don’t know where you’ll end up. The Jumpgates are fascinating--they predate our earliest history, and that of the other races as well. In fact, we all share similar legends of our “starfall” - emerging through the Jumpgate at the edge of the system from...somewhere else. Everyone’s got stories of homeworlds lost in the mists of time and space, yet we wound up here.

My greatest challenge, you ask? It’s the frustration of not knowing. My talents allow me access to a lot of knowledge that would have otherwise been lost. But sadly, I am not complete. I spend so much time searching for our origins because I hope to preserve the gifts and history of my kind because...I am the last of my kind. My people have always been misunderstood by some due to our psionic abilities, so we’ve always kept ourselves apart, somewhat. When the alien attacks occurred, we  were believed to be responsible. Misunderstanding turned very quickly to fear. Never populous to begin with, my people began disappearing against our will, rather than voluntarily retreating to our monasteries and enclaves. And we were not the only ones. My people disappeared, the Hathori--another strain of human-variant people with different talents--began to retreat to their homeworld, suffered extraordinary detentions, and found themselves subject to travel restrictions and public mistrust where they had once seen respect. My partner and longtime friend, Xenna, did not take the change well.

Nowadays? Run for my life. Before the attacks, I enjoyed a quiet life as an archivist, save for the occasions where I traveled to remote orbits, archaeological digs, and ancient places of my people. I still cannot resist an artifact’s gleam at a bazaar vendor’s table. It’s made me some interesting friends...and a handful of enemies.

I fear what fear has done to my star system. We have given up much in the pursuit of security. Granted, some of it is gone for the better, but much of it seems too much like setting aside one dogma for another. I used to fear that I would finally lose the fight against being forgotten. Now I fear that Treska will never be able to unlock what she’s forgotten.

Thank you for hosting me today. It has been a pleasure to be permitted to tell my story. 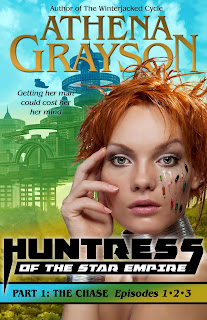 Getting him in handcuffs was the easy part... Known to her targets as the Huntress, Treska Sivekka hunts down the aliens and psypaths whose mental talents are a threat to Union security. Now, with the last free psypath in her crosshairs, Treska's mission is about to be fulfilled. She's not the only one who wants a piece of Micah Ariesis, and she'll have to fight off the scum of the star system to keep him in her handcuffs. Her only problem is that she wants him in her arms...

About the Huntress
Ever since she was found in the aftermath of alien attacks, Treska Sivekka has been trained to one purpose--to hunt down threats to the security of the Union that gave her an identity. But when the Union's biggest threat inspires desire, and not fear, it’s going to take all her training to protect her principles against his persuasive onslaught.

The Huntress's neuro-collar and repulsor cuffs may keep Micah bound to her mercy, but they can't stop him from challenging her convictions, and the lies she's been told about his people. But when the secrets surrounding her own missing memories begin to reveal themselves, he may be the only one she can trust.

Pursued across the star system by the Huntress, helpless as his psionically-talented brethren were brought down one by one, Micah Ariesis must sacrifice himself in a sketchy revolutionary plot aimed at the Union’s heart, but the mystery surrounding his pursuer's mysterious origins puts danger to a much closer heart—his own.

She turned back around to pull his pants back up. I don’t care if it is eight jumps. I’m getting back to Prime, collecting my bounty, and getting the hell away from—things that leaned to the left.
Reaching around put her in close contact with his legs, and she couldn’t help but notice the scent of cool, fresh water that seemed to cling to him.
“Like what you see?”
She started so violently at the quiet words that she flew backwards, landing on her ass with a rattle of the deckplates. A guilty glance upwards showed his eyes, bright blue-gray and gleaming from behind the fringe of hair that hung over his forehead. “You’re awake!” It came out like she was accusing him.
Her skin could have been on fire for the blush that burned her from inside out, all the way from toes to the roots of her hair. She was already warm from the cockpit—oh suns, don’t think of that!—and trying to return his pants to their proper state. This just made things that much worse all around.
“I usually prefer to be conscious when a lovely woman is that close to my private parts.”
She scowled. “You have no respect for the vice laws, do you?”
He met her glare with one of his own. “Why should I?”
“It’s virtue that keeps people safe,” she said, speaking along with the Voice that supplied the immediate answer in her head. “A prudent society is a secure society. Vice and temptation make citizens unsafe. Peace comes through restraint.” How much more simple did it have to be?
“So I shouldn’t be at all worried that you had something pleasurable in mind when you divested me of my pants.”
She blushed even harder, and fell back on her original reason for cutting his belt. “I was checking you for weapons.”
He threw his head back and laughed, exposing the long lines of his throat and jaw, and for one wild moment, she wanted very badly to kiss along the line of it, and maybe nip at the flutter where his pulse beat. He’d like that.
“I can assure you that my fiercest weapon is only that which you see before you,” he said, glancing down to meet her eyes. “And it brings only pleasure.” For a long moment she was caught in the loop of thinking about the taste of his skin over and over, seeing an afterimage of her own tongue flicking out and gliding over the salty scratchiness of his jaw.
“You unsheath it when you look at me like that.”

By DawnsReadingNook at February 09, 2016

Thank you so much for hosting me today, Dawn! It's been a real hoot introducing my hero!

Great Interview and I think I could really crush on Micah.

Great Interview and I think I could really crush on Micah.

Thank you, Nancy! He is, indeed, a crush-worthy guy. :) He does get into a lot of trouble, though...