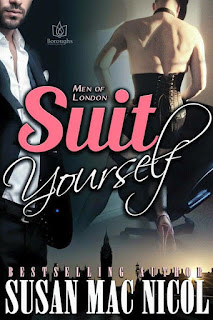 Please give a warm welcome to Leslie Scott from Suit Yourself by Susan Mac Nicol today as we sit down and see what makes him tick.

Leslie  wriggles on his chair in excitement. ‘Well, Susan has this thing for cute young guys who are sassy and just fabulous, so she found me. We get on so well together, she’s just this crazy woman who loves to test her own writing boundaries, and when she found out I love wearing corsets and heels, well that was it. We’ve been best friends ever since.’

A huge smile floods Leslie’s face and his eyes go all dreamy. ‘Oh God, this is such an amazing story to tell. My boss, who’s this crazy cross dressing fashion designer genius called Laverne asked me to go deliver a suit to some guy. I kind of owed her a favour, so I said yes. And I am so pleased she asked me, because when I got there, I got to meet Nicky Starr, the retired porn actor! I’d watched him before on his website, www.nickystarr.co.uk and he is so damn sexy. We didn’t hit it off all that well to start so I sent him a cute card with an apology  (I can be a bit overwhelming)  and he asked me out to dinner. Oliver is his real name and he’s the love of my life.’

Leslie grins wickedly. ‘I dressed up one night in a corset and heels and went to his place. It might not have been the most exotic location but that was one evening to remember. Oliver loves me when I dress up. We’ve had Skype sex too, and that was so fucking hot I’m hard just thinking about it.’

Leslie rolls his eyes. ‘Sweetie, Commando is always good but a man wearing a sexy pair of lacy panties? That is such a turn on. Oliver once wore a pair of mine and I couldn’t get on top of him quick enough…’

Leslie chuckles and flaps a hand. ‘Oh honey, all Oliver has to do is touch me and I’m on fire. And if he slides his hand down the back of my pants and grips my ass, that’s even better. I love it when he takes charge like that.’

Leslie licks his lips and leans forward. ‘Oliver’s got this really sensitive spot, just where the top of his leg meets his hip, and he loves when I lick him up and down there and finally end up you know where. Out of bed, he goes all mushy when I run my hands over his chest and tease his nipples. I know that’s kind of an intimate thing to do but he doesn’t seem to mind.’

Q: What was one of the most embarrassing things your author did to you in Suit Yourself?

Leslie shrieks loudly. ‘Oh the bitch got me to go into a room full of naked models , with female bits, and I had to talk about vaginas and paint a woman’s nipples with rouge. It was the most awful thing ever. I’ll never forgive her for that.’

His eyes grow soft. ‘I’m a big believer in true love and I think there’s a special someone out there for everyone. I’ve seen my friends Eddie and Taylor find their dream men and I’m so glad I have mine now.’

Thank you Leslie Scott for joining us on 'Meet the Character' day here at Dawn’s Reading Nook Blog. You can find all of Susan Mac Nicol’s books at Amazon.

Enter Leslie Scott, the flamboyant, dark-haired, heel-and-tiny-short-wearing twink sent to deliver Oliver’s newest fix. A firecracker, Leslie is dapper, generous, in touch with his feminine side but all man, and as gorgeous as any garment ever made. He makes Oliver dream of ending his reclusion, of recapturing a future forever denied him. But for that to happen, Leslie would have to strip him to the bone. Only then will they rebuild life from the bottom up.

Leslie was exactly what Oliver Brown was looking for. The man just didn’t know it yet. Or rather, he knew it but wasn’t ready to act. It was going to be up to Leslie to get things moving along and he decided the time had come to try his luck.
His foot gently brushed against Oliver’s under the table, and he was gratified when he started, seeing his dinner partner’s eyes heat up as he took a sip from his whisky glass. Leslie took it one step further and ran his booted foot (he hadn’t worn heels tonight, preferring to ease Oliver into that side of him a little more gradually) teasingly along Oliver’s calf.
His lips curved in a smile that said Leslie was courting trouble. The sight of those rich, pink lips around the rim of the glass, and the amusement in his eyes that said Oliver knew full well what was going on, made Leslie as hard as adamantine. He saw the Nicky Starr persona behind Oliver’s casual lick of his lips; his narrowed eyes were almost alive with hunger.
“Bit of a twitchy foot, there Leslie?” Oliver said softly, his tone dangerously seductive. “You might need some medication for that condition.”
“Oh, sorry, did I touch you? My bad. I was just getting…a little uncomfortable. I needed to stretch.” Oliver nodded slowly. Leslie felt the slow stroke of a shoe against his left leg, a gentle sweep that made him want to rip off his clothes and beg Oliver to take him right there. Manfully, he controlled that impulse. Gideon would be as pissed as hell if he didn’t.
The two men stared at each other over the remains of their dinner, each silently acknowledging that things were changing between them.
“So,” Oliver drawled as his foot crept slowly up Leslie’s thigh. “Do you think perhaps we should get the bill and get out of here? Back to my place, perhaps?”
Leslie swallowed, finding it hard to speak as that wandering foot nudged his groin. Said groin was on fire.
“What about the friends thing?” he squeaked, all the while wanting push his crotch into the foot causing him such turmoil.
Oliver’s mouth curved in a wide, sexy grin. “I kind of think that’s a little passé now, Leslie. I am so damn horny if I don’t have you soon, I’m going to come right here at this table. You have no idea how bloody sexy you look,” he murmured huskily.
Leslie knew he’d dressed to kill in his tight black jeans with a huge dragon buckle, a tight wine-red tee shirt, teamed with a black suit jacket with fine red stripes. But the lust and desire in Oliver’s eyes made him quail a little. This was a man who had lapped at other men’s arses for a living and then fucked the daylights out of them. As much as Leslie had his fantasies, he was a little overwhelmed at that thought. 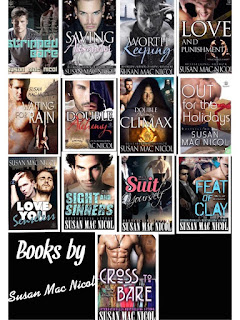 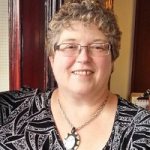 Susan Mac Nicol is a self- confessed bookaholic, an avid watcher of videos of sexy pole dancing men, geek, nerd and in love with her Smartphone. This little treasure is called ‘the boyfriend’ by her long suffering husband, who says if it vibrated, there’d be no need for him. Susan hasn’t had the heart to tell him there’s an app for that…

She is never happier than when sitting in the confines of her living room/study/on a cold station platform scribbling down words and making two men fall in love. She is a romantic at heart and believes that everything happens (for the most part) for a reason.  She likes to think of herself as a ‘half full’ kinda gal, although sometimes that philosophy is sorely tested.

Lover of walks in the forest, theatre productions, dabbling her toes in the cold North Sea and the vibrant city of London where you can experience all four seasons in a day , she is a hater of pantomime (so please don’t tar and feather her), duplicitous people, bigotry and self-righteous idiots.

In an ideal world, Susan Mac Nicol would be Queen of England and banish all the bad people to the Never Never Lands of Wherever -Who Cares. As that’s never going to happen, she contents herself with writing her HEA stories and pretending, that just for a little while, good things happen to good people.

Sue is a PAN member of Romance Writers of America and is a member of the Romantic Novelists Association in the UK.

By DawnsReadingNook at February 10, 2016

I have just downloaded iStripper, so I can have the sexiest virtual strippers on my taskbar.