Ronna Gage Vampire Chronicles
I have seven installments invested in this series. Book one has already came out. I took chance on the vampire romance and found it was much harder than I thought it would be. So many things didn’t sit well with me. Sun burned them to a crisp, couldn’t maintain their e own lands and properties, only worked at night so their faces are pale white almost like liquid paper? None of that made one bit of sense to me. I adapted my vampires; Marty and Greg to adjust to their environment over the years, and viola, there you go. No day rings, not working in the night hours only, although too much sun does make one weak. So of course most socializing is done in the evening.
In the first book I ask the reader to ponder the question; would you allow yourself to be changes into a vampire knowing it out and you would live forever? Knowing or not that at your death you may or may not go to heaven.
It does give you something to think about doesn’t it?

Have a wonderful day, Ronna Gage.
Bibliography Page
I have found a site containing 480 quotes. I’d like to share a few with you now.
― Bram Stoker, Dracula
Key words: darkness light mina van-helsing
3. “Once again...welcome to my house. Come freely. Go safely; and leave something of the happiness you bring.”
― Bram Stoker, Dracula tags:
Tags: entrapment, supernatural,
https://en.wikipedia.org/wiki/Count_Dracula#Early_life
All these books: can be bought at Amazon, and at Barnes and Noble at and at their individual publisher 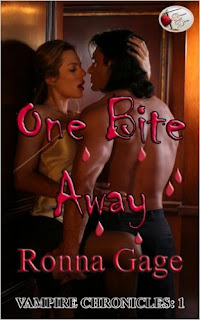 Martin Novak insisted that he’d never change another person’s life for love and his pleasure. For centuries he lived by that self-imposed code. Now, he is contemplating a change of heart for not only his own pleasure, but to save the life of the woman he loves. Carleena loved life and lived it to the fullest. Love and happiness fills her now that she’s found her perfect man. But when she learns she is sick, and it could keep them apart, her life is further complicated by the secret Marty has been keeping. Will he truly be the perfect man for her? Will he love her to the end? Is her hope for everlasting happiness only…One Bite Away?
Buy Links


Buy Links to other online bookstores
http://www.amazon.com
http://www.barnesandnoble.com
And don't forget the publishers!

By DawnsReadingNook at February 18, 2016