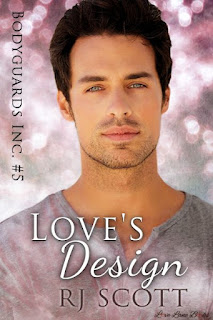 Blurb: Can Christmas be the time when Kirby finally stops running and allows himself to fall in love with the man who saves his life?

CIA Agent Stefan Mortimer is cooling his heels in the UK until he can go home. Taking on easy assignments with Bodyguards Inc. seems like a good solution to keep him sane. He's used to life throwing him curveballs, and it’s just another day at the office when he rescues Kirby Devlin and his niece and nephew. Now he has to keep Kirby and the kids alive and stay professional.

Kirby Devlin has one priority; keeping his small family safe. On the run, and facing danger at every turn, Kirby finally runs out of places to hide on a snowy December day at Edinburgh airport. Stefan comes to the rescue, saves him and the children. Is it possible that Kirby finally has someone to trust?

Now, if only it would be as easy for Kirby to trust Stefan with his heart.

Kirby slumped against the wall, and slowly he slid down, so his ass was on the floor. He drew his knees up and wrapped his arms around them.
Stefan wanted to encourage him to start talking, but instead he waited. He had no idea where this sudden patience came from.
“You’re really CIA?” Kirby asked softly, so low that Stefan had to concentrate to hear him. He scooted the chair closer with one leg.
“Ten years now.”
“Why are you here in Scotland? Why is an American CIA agent at the train station?”
Stefan wanted answers; he didn’t want to be the one explaining himself.
“A case,” he said dismissively. “So, what were you doing at the station?”
“Getting a train,” Kirby answered.
“Clearly that worked for you. What train?”
“They closed the coach park, so any train.”
Stefan sat back in his chair. This was avoidance from Kirby at best. “Why?”
“To get away from here. I wanted to get Andy and Louise out of the city and anywhere I could reach that would be safe.”
“Why do you need to get them away? Who are Bull and Tommy and the other man?”
“McLeod, that was the last man you—”
“The last one I hit,” Stefan finished. “Is that the man who hurt your brother?”
“Aye, seems that way. My brother, Robbie, is in the hospital because of McLeod. The other two are Bull and Tommy, who work for him.”
Stefan honed in on one thing in that whole sentence. “Your brother is in the hospital, so the stab wound Andy mentioned was a bad one?”
Kirby half sobbed but stopped himself before it went further. Despair crossed his features. “I think Robbie’s dead.”
“You saw him dead?”
Kirby shook his head. “I don’t know. They got to him. He contacted me a while back to reconnect, but when we finally met up a week ago, he was begging me for my help. Told me he and the bairns were in danger.” Kirby buried his head in his knees. “I didn’t even know I was an uncle.”

RJ Scott has been writing since age six, when she was made to stay in at lunchtime for an infraction involving cookies. She was told to write a story and two sides of paper about a trapped princess later, a lover of writing was born.

As an avid reader herself, she can be found reading anything from thrillers to sci-fi to horror. However, her first real true love will always be the world of romance where she takes cowboys, bodyguards, firemen and billionaires (to name a few) and writes dramatic and romantic stories of love and passion between these men.
With over seventy titles to her name and counting, she is the author of the award winning book, The Christmas Throwaway. She is also known for the Texas series charting the lives of Riley and Jack, and the Sanctuary series following the work of the Sanctuary Foundation and the people it protects.

Her goal is to write stories with a heart of romance, a troubled road to reach happiness, and most importantly, that hint of a happily ever after.

a Rafflecopter giveaway
By DawnsReadingNook at December 12, 2015

WE may not have a Christmas tree this year. Or we may get a tiny life plant and try to raise on in our back yard

I'm not big into the holidays, and I'm Jewish, so no tree here. Since I live alone, I keep things simple.