Discover the world of Sue Brown in her delightful series, Lyon Road Vets. I can attest you will fall in love with this author's writing and devour all her books. 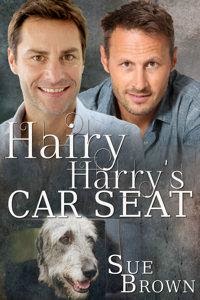 Peter Mitchell walked away with from his marriage with two things: a suitcase and Hairy Harry, the family pet.

When Harry becomes ill, Peter is faced with one of the hardest decisions he's ever had to make... saying goodbye to his best friend.

Evan Wells is the locum vet who attends to Harry and Peter is surprised at how quickly they become friends. Peter finds himself looking forward to Evan's nightly phone calls and the meals they share together. He knows Evan is gay but it doesn't bother him until Evan confesses his attraction to him. Peter has to admit to himself that he's not as adverse to the possibility as he thought he would be, and that does bother him. 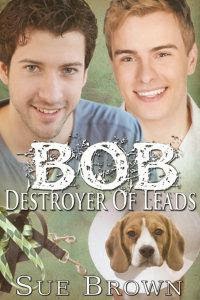 Lyon Road Vets Book 2: Bob the Destroyer of Leads
Available at Amazon & ARe

Bob, a beagle with a very bad attitude. He eats through every lead purchased by his despairing owner, Will Duffy. One moment he is walking to heel, the next he is a free dog, triumphantly tearing down the road with Will chasing after him.

It's a great game for Bob until the day he breaks through lead number ten and is hit by Lawrence Taylor's car as he runs across the road, leaving Bob unconscious and his back leg broken. Will has to ask Lawrence for a lift to the vets, and endure the man's scolding all the way there. Even worse, Will discovers Lawrence is a dog trainer!
Bob ends up in a cast and is forced to wear the cone of shame. Of course, Lawrence thinks all Bob and Will need are dog training classes, except Bob hasn't met a trainer yet he couldn't break. Is Lawrence man enough for the job? 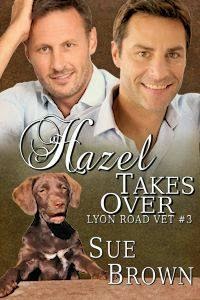 After the death of his beloved dog, Harry, Peter Mitchell refuses to consider getting a new dog. Besides which, Peter has his hands full with his partner, Dr Evan Wells. The vet is surprisingly sensitive about Peter’s feelings and doesn’t nag Peter about getting a pet. Of course, not nagging and not doing anything about it are two different things, at least in Evan’s mind.

When Peter is presented with a small red bundle of fur to hold, he realises the devious vet planned their new arrival and worse, she’s already got a name. Peter may not have a choice about their dog, but he’s going to put his foot down over her name. He should know better.

When a certain kind of man is needed, why not make him to order? Such things can be done, but take care: Much can go wrong—but then, sometimes it can go wonderfully right. Imagine...

Sue Brown is owned by her dog and two children. When she isn’t following their orders, she can be found at university listening to lecturers discuss long-dead theologians. In her head, however, she’s plotting how to get her cowboys into bed together; she just hopes the lecturer doesn’t ask her any questions.​
​
Sue discovered M/M erotica at the time she woke up to find two men kissing on her favorite television series. The series was boring; the kissing was not. She may be late to the party, but she’s made up for it since, writing fan fiction until she was brave enough to venture out into the world of original fiction.