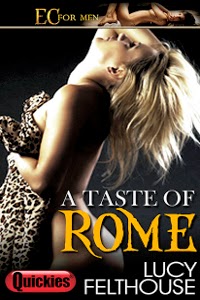 A Taste of Rome by Lucy Felthouse
Book three of the World of Sin series.
Ellora's Cave

Ryan Stonebridge and his friend Kristian Hurst have travelled to London and Paris on their “gap year” adventure, before starting university. Now it’s on to Rome.

The American girls they met in Paris are along for the ride, providing lots of sexy fun for the boys. But as no one in the foursome is looking for commitment, there’s still plenty of scope for hooking up with the locals. Voyeurism, cougars, risky outdoor sex and threesomes abound in the Italian leg of the boys’ European adventure.

Ryan came to the conclusion that perhaps this journey wasn’t so horrendous after all. He’d been a little miffed that the American girls, Shanna and Taryn, had wanted to tag along from Paris to Rome with him and Kristian. He’d been keen not to end up with any chicks who wanted more than a one night stand, figuring that any romantic entanglements would screw up their footloose and fancy-free gap year trip. Their last year of freedom, without commitment, before they went to University and had to grow up, buckle down.
In the here and now, however, Ryan decided that Shanna actually wasn’t that bad. It seemed she was determined to spice up the never-ending coach trip from Paris to Rome. Eight hundred and seventy miles, thirteen hours. They’d known when they’d booked it that it would be nigh on intolerable, but it was the cheapest way to travel. And having sat in the increasingly stuffy, tiny coach, Ryan could see why. It made cramped seats in coach class on a flight feel like first class.
Shanna had removed her jacket as the crap air-conditioning was utterly failing to cool down the cabin. It had been draped over her lap for a while before she slid it across so it covered part of his too. Ryan frowned, wondering why she thought it was a good idea to make him warmer. He was already melting in the heat. Then she slipped her hand beneath the jacket and moved it over his crotch. She squeezed his flaccid cock, making her intentions absolutely clear. He realized that if he continued to stare down at their laps it would be painfully obvious to anyone who glanced in their direction what they were up to. So he leaned over and kissed Shanna’s cheek, nuzzling her red hair out of the way to murmur into her ear.
“I’m going to try and act natural.” Then, remembering what had happened to him back in London when he’d ended up with cum-filled boxer shorts, he added, “Can you, uh, catch it in a tissue?”
Grinning, Shanna revealed the flimsy white material in her other hand. It appeared she’d already thought of that. Saucy wench—he liked her. She was a fun girl, gorgeous-looking and a great lay. Had things been different, he might have considered pursuing something long-term with her, but it wasn’t going to happen. He and Kristian had this one chance, this few months to live life to the fullest, do what they wanted, do who they wanted, go where they liked, and he wasn’t going to throw it away for a green-eyed, cute-accented chick. No way.
He wasn’t worried about upsetting her, though. He knew that she and her friend had a similar pact and outlook on their European travels. They too were hooking up, having a good time and moving on.
Ryan grinned out of the window. Life was good. A sexy girl was about to get his cock out on a coach and toss him off, and he was heading to the third destination on his gap year adventure. The Italian capital awaited and he couldn’t wait to see what it had in store.
Before he got there, though, he was going to have another orgasm on public transport. First the toilets on the Eurostar, now beneath a jacket on a coach. God, what was it with women and doing it in cramped, risky places? And Blanche—the French bird on the Eurostar—and Shanna weren’t the only ones he was thinking of. He was beginning to forget what it was like to have sex in a bed. Not that he was complaining—Christ, no. If a sexy woman propositioned him, who was he to refuse?
By now Shanna had undone his belt, button and fly and released his cock from his boxers. It had taken a while as she’d had to keep her movements slow, subtle, so no one realized what was happening. As a result of all the fumbling, his dick was rock hard by the time she got it out, and it sprung eagerly into her hand.
She leaned her head on his shoulder and he slipped his arm around her, pulling her close. Anyone who looked now would just see a couple of young people having a cuddle. Or possibly a hot redhead sleeping on the shoulder of a young man who could either be her boyfriend or a total stranger.
Carefully, she began to stroke him, getting into a rhythm that would drive him to climax without anyone knowing.
Ryan turned back to the window, giving the appearance of looking out at the darkening sky. Shanna’s grip tightened, her movements grew faster and he grew closer to coming. He dug his teeth into his bottom lip in an attempt to regain some kind of control. It didn’t help—his hormones raged and the familiar tingle at the base of his spine was a dead giveaway.
Looking as chilled out, as casual as possible, he turned to Shanna and whispered, “You’d better get that tissue ready—otherwise I’m going to make an awful mess.”
She gave a single nod of understanding and moved her other hand beneath the jacket, slowly, languidly. It probably looked as though she was just changing position, rather than anything naughtier. Ryan, however, was at the stage where he didn’t care. If anyone happened to look across, happened to confront them, he’d hold a hand up to keep them quiet until he finished.