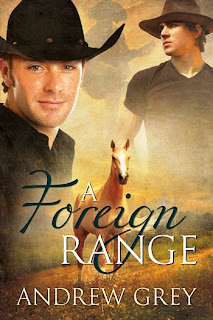 When I saw Andrew Grey had another Range story, let's just say I screamed in happiness. *grins* Then I got to stalking Dreamspinner Press and Andrew's website to see what it would be about, when it came out and more. Get ready for a story that will leave a smile on your face and introduce two characters who steal your heart.


My Rating for A Foreign Range-4.5 Stars


Wilson Edwards needs peace and quiet. A fraud as a cowboy, he may sing about the cowboy way of life but he has no clue what it entails. Buying a ranch in Wyoming has him thinking he can finally get away from the shallowness of the world he lived in, away from a controlling manager and finally find the peace he needs to create the music many adore.

Steve Peterson ran away from his father and the cult he lead by the skin of his teeth. Now with the job he thought he had gone, Steve has no idea what to do. When he meets Wilson, he finds a man willing to help and show Steve what strength he has in himself as well as fall in love with. But Wilson also has to decide-will it be his career or his love for Steve-when word hits the gossip magazines and the public.

Andrew Grey delivers another home-run with his latest Stories from the Range series. His stories are always full of intriguing characters & a fast paced story-line that enthrall his readers. With the right amount of tension, real world themes and friendship, he delivers stories that continue to garner accolades and readers alike.

Meet Wilson Edwards, a country singer and fraud cowboy. He needs to find his muse again and buying a ranch in Wyoming seems like the perfect thing to do. He gets to see the cowboy way of life up close and personal and get away from the rat race, shallowness of L.A. that has taken over every aspect of his life. I really enjoyed Wilson. He was a man who needed a place to set down roots and I enjoyed how he stood up to his controlling manager.

Meet Steve Peterson. A man who has just escaped from a gay deprogramming center his cult leader father put him in and now on the run, scared and alone, he has no idea just how strong he really is. That is until he drops in to where he was to have a job and finds the place sold & the job lost. No idea what to do, Steve finds an angel in disguise when Wilson offers him to ranch-sit while he is away on business. I really liked Steve a lot. He was scarred inside and out by a father who wanted the gayness out of him. The depths he had left me cheering he would get the happy ending he so richly deserved. The sparks flew between him and Wilson and I really enjoyed how they complimented one another perfectly. Wilson let Steve grow as a person and Steve showed Wilson that life is nothing without the right person beside you.

I really enjoyed seeing my old friends again from the past three books (A Shared Range, A Troubled Range & An Unsettled Range) again. I love Wally & Dakota and seeing how their lives continued after their own happily ever after made me smile more times I can count.

With each book, Andrew Grey just gets better and better. His writing is tight, storylines flow smoothly and the simmering sexual tension between characters leaves you eager for more. I cannot wait to see what happens next on the range and hope we won't have to wait too long for our next dose of stories on the range.

Run-don't walk-to Dreamspinner or any online book vendor and grab your copy of A Foreign Range and get ready to ride the trails with these sexy cowboys. Definitely one book I plan to read again.

The Stories from the Range Series is as follows: 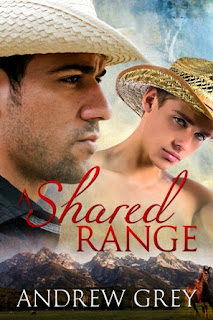 After a year in medical school, Dakota Holden returned home to take care of the family business full time and help his father cope with multiple sclerosis. Devoted to his family, Dakota allows himself just one week of vacation a year, which he spends in some exotic location having all the fun he can stand. On his last vacation, a cruise, Dakota struck up a friendship with Phillip Reardon, and it fills an important role in Dakota’s life.
So when Phillip decides to take Dakota up on his invitation to visit the ranch, Dakota is happy to see him and meet his veterinarian friend, Wally Schumacher. Despite Wally’s inclination to help the wolves Dakota’s men shoot to protect the cattle, he and Dakota find they have a lot in common, including a fierce attraction. But they’ll have to decide if the Wyoming range is big enough for Dakota’s cattle, Wally’s wolves, and their love. 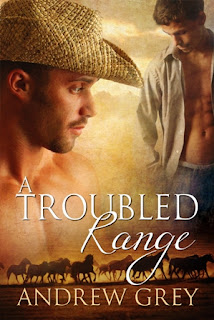 The neighboring Holden and Jessup ranches are anything but neighborly—Jefferson Holden and Kent Jessup loathe each other. But despite his father’s long-held grudge, Haven Jessup just can’t bring himself to hate, especially after Dakota Holden takes him in during a violent storm and Haven meets Dakota’s friend, Phillip Reardon.

Phillip accepts Haven for who he is, seeing through the mask Haven uses to hide his attraction to men, but their tentative and secret relationship will be under a huge amount of stress. Sabotaged fences, injured animals, unsavory plans, and Jessup family secrets will threaten Haven’s newfound happiness and his hopes of a future with Phillip. 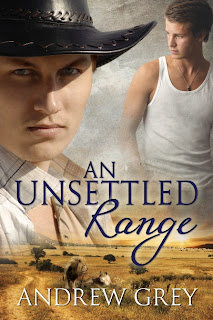 The last thing Liam Southard expects when he flees his abusive father is to be taken in by a couple of gay ranchers. Soon he has a new job and a new perspective on his sexuality, and his life starts to turn around. Then someone pulls a gun on him.
In Troy Gardener’s defense, the gun thing was a mistake. Between his marriage falling apart and living in his uncle's isolated hunting cabin, he's been a little edgy. He wants to make it up to Liam, and once he discovers how much they have in common, he wants even more. But with Liam's father popping in unexpectedly and a mining company threatening the ranch’s water supply, the only guarantee is that life is never going to be boring.