Give a Warm Welcome to AM Burns 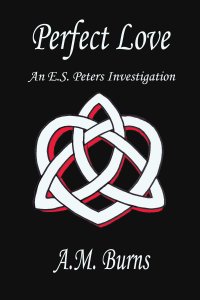 Welcome to Dawn’s Reading Nook, AM Burns. Please let my cabana boys/girls get you a drink and make yourself at home. Comfortable? Great…now let’s get down to business.

Can you tell us a little about how you started writing; was it something you have always wanted to do?
I started writing in high school, and then kept it up whenever I had boring jobs that allowed me the opportunity to writer, be it on paper or computer. I’ve thought I was good at it for a while, folks enjoyed it and I love story telling.

What do you consider to be the key elements of a great story?
Good characters and a strong plot, beyond that everything else falls into place.

Could you tell us a little about how you develop your characters? Who has been your favorite character to write? The most challenging?
I get ideas for characters, sometimes they spring fully formed from my brain, like Athena, and sometimes they take a bit of work.
My favorite character has to be Tal O’Duirwood, from the Yellow Sky series. He’s under gone some radical changes recently that have made him more fun to write.
As far as main characters one of the most challenging is Ethan Samuel Peters from E.S. Peters series, he doesn’t flow as easily and therefore the books in that series take a bit longer to write.

Please tell us about the projects you are currently working on; what can readers expect to see in the coming months?
I’ve got several things going on right now, I’m working on sequels for both “Blood Moon, Yellow Sky” and “Perfect Love” actually by the time this goes on line both sequels should be finished and I should be working on the next books in the series as well as another Adventures of Alchemy Pond book.

Where can readers find out what's new and how can they contact you?
My website is www.amburns.com, there’s a list of my work there and my blog.

Do you have a strict writing schedule? How do you balance your personal and writing time?
I keep trying to get a strict writing schedule, but life and family tend to fight me on that. I normally get between four and ten hours of writing/editing/marketing in a day. It’s a business and I try to treat it that way, but folks think when you’re self employed you can do what they need you to do, and there’s a few folks like close family that it’s hard to say “no” to.

Which author(s) is your favorite? And who has most influenced you work?
When I was young I read a ton of comic books and fantasy novels. Folks like Anne McCaffery, Marion Zimmer Bradely, Mercedes Lackey and Robert Asprin. Nowadays I read a lot of urban fantasy, Carrie Vaughn, Laurel K Hamilton, Patricia Briggs and Kim Harrison. For good measure I still throw in the occasional mystery by Tony Hillerman.
I think I’ve been influenced by most of the above in one way or another.

If you could have any vice without repercussions, what would it be?
I’m a falconer, that’s vice enough for anyone.

If you could have been the servant to any famous person in history, who would that be and why?
Nicola Tesla, the man was a genious, and must have been very interesting to be around.

Which of your characters do you love/hate/fear/pity the most and why?
In “Blood Moon, Yellow Sky” I feel sorry for Estaben, no one ever truly got to know him in life, or in undead either. He’s kind of a lost soul that never found a place to be.

Have you ever experience weird cravings while you write? If so, what kind?
Weird cravings…other than cheesy poofs, no.

Tell us about your favorite characters you love when writing. Are the heroes alpha males? Sweet yet shy geeks? And those heroines (if there are any in your story), are they feisty, independent “Take no prisoners” kind of women? Do they love it when a strong man takes care of them, pampering them? Give us the dirt on them.
Men: Alpha geeks, they have brains, and they’re not afraid to take charge when the time is right.
Women: Strong and feisty, not afraid to push the man aside and say “Let me do that.” You run into both in my stories, and the shrinking violet and the dumb jocks are only around for comic relieve or cannon fodder.

If you could set up your writing desk anywhere in the world to write, no interruptions for 48 hours, where would you go and why?
That’s a toughie, I have an almost perfect set up right now, I can see the mountains from my desk, and have all sorts of wildlife come sauntering through the yard during the day. Just today, I watched mule deer, foxes, coyotes, squirrels and numerous birds in the yard. Are the interruptions or way to rest my mind for a moment? I think anywhere else would either be boring or distracting.

If you could be with any celebrity/author/character for a day, who would it be and what would you be doing?
Disney World with Hugh Jackman, that would be fun.

Tell us where to find you on the web.
www.amburns.com there are connections there to facebook and twitter as well as links to by all my work in many different formats.

“Blood Moon Yellow Sky” Paranormal Romance/Urban Fantasy
Link : http://www.amburns.com/yellowsky.html
Blurb:
Tal O’Duirwood, dragon, enjoys his quiet life of solitude in the mountains. He never realized what was missing until his gets an assignment to travel to Yellow Sky, and help a witch and her students there stop a vampire invasion. Once there, he finds that things were not as he was told. The witch is actually a werecoyote, and one of her students has eyes for Tal. Can Tal help stop the vampires in time to save his blossoming love? Will his heart, so long closed off from the world be able to open to the touch of the handsome young mage?
Excerpt:
“Don’t worry about it,” he interrupted “You can either follow my lead, or just let the music take you. It can be almost magical.”
And then, we were on the dance floor. The sea of people closed in around us as Alex began to move with the music. All the time he refused to release my hand. We pressed into the heart of the dancers. Most of them moved in time to the music. Here and there I could see someone that obviously had their own rhythm going on in their head. The music seemed to take control as we moved closer toward the center of the dance floor.
Suddenly Alex stopped and I bumped into him as he turned to face me. He released my hand then and his dancing became more frantic. There was a bright smile on his face as his lips moved in time with the words of the song. His body writhed with the pulse of the music. I tried to get into it myself. I felt the music moving across me like wading into the surf. I mirrored Alex’s movements so that I didn’t just stand there in the midst of the dancers like the lone flower that somehow is not blown by the wind. Alex reached out for my hands and began to move them around between us. I relaxed and let him take control of my movements, merging with the music as the song changed.
A primal beat surged out of the new song. Alex laughed, then released my hands and moved in closer to me. Heat rose from him and he began to move against my body. I did my best to flow with him, so we looked like two lovers out for an evening of dancing. I felt a pull from him as his mind reached out for mine. It tried to illicit a response from my body. And before I could stop it, I felt a sensation I hadn’t felt in a very long time. This human was calling forth energies I’d buried long ago.
I was about to head back to our table when he caught my hands again and pulled me tightly against him. He pressed his mouth against mine. With the intimate contact, lust and need poured off him. I couldn’t help myself as long dormant feelings within me found an outlet. I wrapped my arms around him and returned his kiss with vigor, felling the urgency in both of us. I tried not to think about what would’ve happened if we hadn’t been in the middle of a dance floor surrounded by hundreds of people. He pulled back slightly to look me in the face. His green eyes sparkled in passion.
“Damn, you’re hot,” he whispered in my ear before sinking his teeth into it.
By DawnsReadingNook at April 18, 2012

Dawn,
Thanks for having me as a guest on your blog. You have an awesome site.