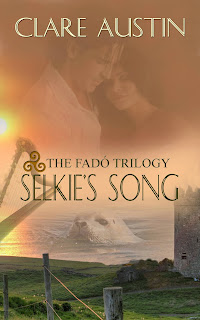 They call her Selkie. Muireann O'Malley often felt she was born of the sea but refuses to let sentimentality stand in the way of her crusade to protect the shore she has wandered since a small child. A patch of West Clare, , and a derelict building are all that stand between the cliffs she loves and the callous grip of progress.

Tynan Sloane should be content with success, but a dream beckons. O'Fallon's Pub in historic downtown is for sale and Tynan wants to make it his. An unexpected inheritance of land in the west of could provide the financing he needs. He doesn't expect his quick trip to sell the land to rekindle youthful passion.

Fifteen years ago, they had an adolescent crush. Now disparate ambition and a legend as old as herself stand between them. Will love and myth collide to bring them together or tear them apart?

Nearly everything about Muireann was contrary to his long-held list of requirements. She was not only
opinionated and devotedly rural Irish, but she liked to swim in the sea, stand on the edges of precipitous cliffs, and had a dog with an appetite for expensive shoes.

All he knew was he couldn’t imagine booking it back to until he understood what it was about this selkie. How could she pull him into her gravitational sphere and refuse to let him escape?

He rose and stepped behind her. Though they stood in shadow, the heat of her body warmed him. He
breathed in her scent and tried to keep from touching her.

Resisting her was not possible. He placed his hands on her shoulders and let his lips tickle the back of her neck.

“Sorry, did I startle you?” he whispered.

“No.” She turned to face him. “Let’s forget this for awhile.”

“Forget what?” He tried to read her eyes.

“Bertie, his stories, the land…all the controversy.”

“Sounds like a grand idea. After all, we have very little time and I barely know you, Muireann.”

“Why do you think you want to know me any better than this, Ty?”

“Are you sure you’re not just trying to get into my knickers?”

His hand went to his heart in mock distress. “You wound me! Do you take me for a shallow man?”

The gesture, whether intentional or not, punched the breath out of him. “You really shouldn’t do that.”

“What? This?” She licked her lips again, more slowly this time. Her hands crept around his waist and
stroked the muscles at his back.

“Yeah, that.” Ty pulled her a little tighter against him. “We could stand here and pursue that line of
reasoning or we could go back to your cottage.” He wasn’t sure if the thunder was coming from the clouds off the sea or his blood coursing through his body. “It’s going to bucket on us.” As he examined the sky, the first drops hit them. He released her from his embrace and took her hand.

“Which way is the fastest?” 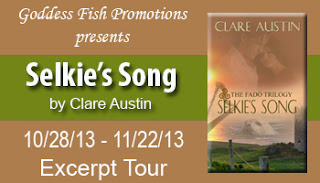 Giveaway Information:
Clare will be awarding a print (US only) or digital copies (international) of the first two books in the series,Butterfly and Angel's Share to a randomly drawn commenter during the tour.

Leave a comment for Clare to be entered into the contest then follow the tour and leave additional comments; the more you comment, the better the chances of winning. The tour dates can be found here: http://goddessfishpromotions.blogspot.com/2013/09/virtual-excerpt-tour-selkies-song-by.html 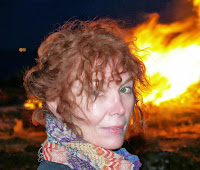 A word about the author...

Clare Austin submitted her first manuscript to a publisher at the age of eight years. She wishes she still had that rejection letter.

Many years and not a few stories later, with characters knocking at the inside of her cranium and begging to be released, Clare’s romantic comedy, Butterfly, was published. There followed a suspenseful sequel, Angel’s Share, and Hot Flash, a women’s fiction/romance for mature women and the men who love them.

Clare lives in the beautiful and enjoys her horses, playing her violin, and traveling to every summer.

Thanks, Dawn, for hosting my excerpt. I hope your readers enjoy this little bit of my novel and enter to win my other books with their comments.
Clare Austin