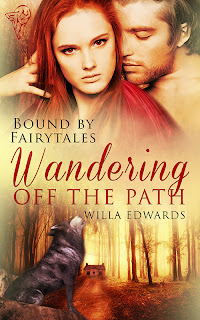 Reuniting with an Old Love by Willa Edwards

A popular story line for romances is the reunion of two old loves. I’ve even written this story myself. It can be great fun to write, but I never thought I’d be living my own reunion story. Though I haven’t reunited with a person I used to love, but instead with an old passion.

The first romance novel I ever read was a medieval historical. I loved it, the idea of castles and countess, men riding on horses and waving swords after their enemies. It was a grown up version of a fairytale. I quickly expanded from there into Victorian romances, the courtly practices, the manners and the stolen trysts, quickly filled the same love of the old fashioned values and romance as the previous historicals. I even loved historical westerns, with their pioneer heroines and cowboy heroes.
When I first starting romance, I tried to write these historical romances that I loved. While there are a lot of difficulties that go along with writing historical, such as research and accuracy, I loved the stories. It was the closest I’d ever get to living out my own Cinderella fairytale (especially now that Prince William is married). Along the way I discovered erotic romance, and started to combine the two, until the petticoats and chemise were flying and the pages were on fire.

Yet the urge to write historicals never completely left me. There’s such romance in their stories, in a time when odds really were against the characters, and where just as many external forces could keep the hero and heroine apart as their internal conflicts. So I finally sat down and dusted off that old historical romance, I sank back into the past. And thankfully a publisher was willing to do the same with me.

Though I love my contemporaries, and I will continue to write them, it feels good to reunion with my old love. Now I understand why so many books are written with the premise.

One a moonlight walk down a shadowy forest path, Abigail discovers all she’s ever dreamed of in the form of one sexy Wolf.

Abigail has always wanted more than a quiet life living with her grandmother has offered. The only thrills she has are her monthly trips to market. While returning from one of these excursions with a basket full of goodies, she is approached by a stranger on the road. He offers her all the pleasure and excitement she could ask for, Abigail flees, afraid of what will happen if she strays from the path she knows.

But Wolf isn’t willing to let this interaction, with the fiery, curious red-caped woman, be his last…no matter what he has do to convince her otherwise.

When Abigail returns home her grandmother is missing and the alluring stranger has taken her place. As Wolf shows Abigail exactly how much pleasure and excitement he can give her, she finds staying on the safe path increasingly difficult. But if she gives into his offer will she be forever pushed beyond the way she knows, never to return again…or will she receive all she’s ever wanted and more.

"You’ll be fine, as long as you stay on the path," Abigail coached herself, clutching the basket handle tight. The icy sweat on her palms made the wicker slick. Her hold bore the imprint of the woven pattern into her soft skin.

The full moon hung high in the October sky. Its silvery-white light descended upon the forest, casting the entire glade in harsh shadows. Stars flecked the otherwise black sea of the sky. The barren branches of the surrounding trees extended across the round illumination, reaching out to claw the orb from the sky. Their abandoned leaves crunched beneath her soft leather boots and her steps echoed through the still night.

An owl hooted to her left, raising the hairs along the back of her neck. She’d delayed her trip in town too long, again. She’d only needed a few items for her grandmother, a bottle of wine and a small apple cake, but the activity in the market square had intrigued her into staying longer. Her stomach still twisted from the bawdy story the market bard had sung, directing his words to one of the local town beauties. The lady’s moans still echoed in her ears as the bard had reaped the rewards of his attention, hidden within the cobblestone alley.

It was sinful to watch the couple together, to covet what the other woman possessed. But her dream to be the object of the same devotion she saw shining in the bard’s eyes overpowered her sense of right and wrong. The chance to watch this beauty receive the complete abandon and bliss she craved was impossible to resist.

Her nipples tingled as she imagined a man caressing her the same way. His mouth sucking at her breasts, his hand pushing up her skirts to stroke the skin no one else had ever touched. Her legs quivered. Wetness dampened her thighs.

In all her twenty years, she’d never experienced anything as thrilling as the lady had received in the arms of the songster. No one had ever made her feel even a fraction of the passion the lady had screamed out. Certainly not Hunter, her childhood friend and the man her grandmother wished her to marry, regardless of her lack of interest in him. He was too predictable, too easy, too boring. She wanted heat, passion, explosion. She wanted more.

An animal skittered across the scattered leaves of the forest floor, and Abigail whirled towards the noise. The crackle of dried foliage and branches breaking beneath the creature’s small feet sent her heart pounding. Fear spiked her blood. She pulled her scarlet cloak tight around her, gripping her precious cargo harder with her other hand.

"It’s merely a mouse. No need to worry, dear lady," a thick voice growled from the shadows.

Among the barren autumn trees, a man stood swathed in shadows. His silhouette displayed an extended height and powerful body. Moonlight illuminated his face in shapes, displaying fragments of his features. She glimpsed full sensuous lips, bearded cheeks and dark heavy eyebrows.

"I wasn’t worried." Why was she speaking to this man instead of running from him, as she should? Her grandmother had always taught her the woods were a dangerous and mysterious place. People who went in often never came out. What type of man would be hiding among those trees? Certainly a man who thrived in such a perilous environment could not be trusted.

Found alone on the road by a strange man, no one about to help her if she needed, Abigail should have been frightened. And she was. But her skin prickled with awareness. She shifted her feet restlessly on the ground beneath her, but the urge to run never reached her.

The stranger’s throaty laughter filled the still air. The intensity and tone reminded her of the bard playing in the market square, and the deep moans he’d made thrusting against the dairy maid.

"What causes you to be out at night, my sweet?" The voice floated to her from the forest’s edge, sending delightful chills across her chest.

She fought the yearning to stray from the path, desperate to search out the secrets hidden in the shadows, and the commander of the alluring voice within. She might be interested in this stranger, but she wasn’t foolish. It was dangerous enough to be alone on the road at night, but to abandon the safety of the path to explore the mysterious forest and the even more mysterious man among the trees would be reckless.

"I’m bringing these to my grandmother’s house." She waved the basket in her white-knuckled grip. The wine bottle clinked against the wicker sides as she held it aloft.

"It’s late. Didn’t your grandmother warn you against walking in the woods at night?"

"Yes." Abigail summoned all her courage to remain strong, as her grandmother always was, and had taught her to be. But the pull of the man was magnetic. "And that I shouldn’t speak to strangers on my way home."

As if sensing the lack of bite behind her words, he let out a deep chuckle. "’Tis true, pet, but there’s far more adventure to be found beyond the path with a stranger than quietly wandering home to your grandmother."

She examined his silhouette, assessing the intent behind his words. Could he sense her longing to wander? The gnawing need to experience more than her quiet life offered that beat within her breast.

Thank you so much for having me Dawn. Its great fun to be here.